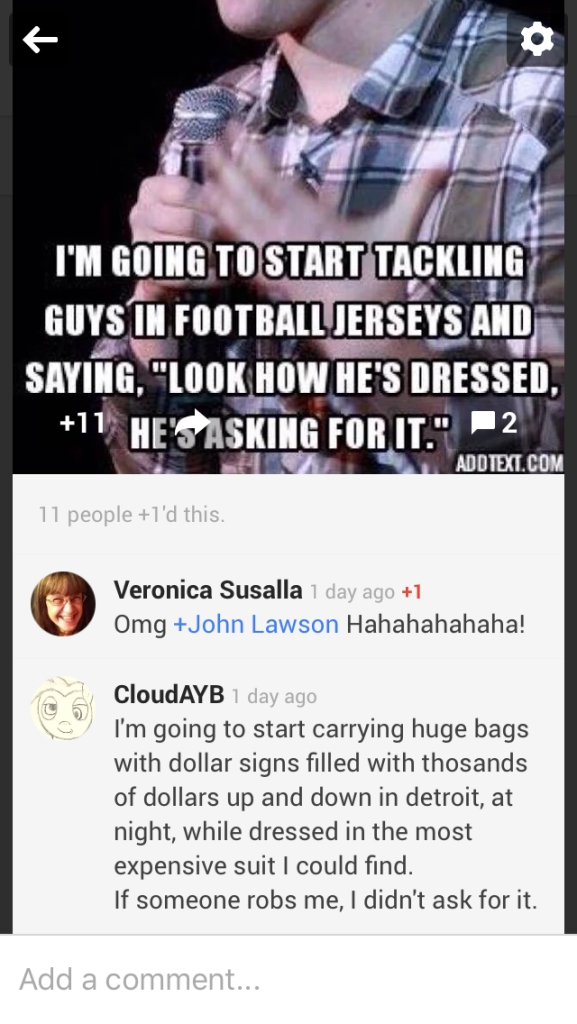 Violence is something I don’t think you should have to endure, or be injured or killed in the attempt to avoid. So I shared the above meme with the intention of flipping the perceptions on certain types of violence, and how that violence is frequently excused away.

Not everyone will agree with me, and I encourage disagreement. I think everybody should be able to post their opinions on their personal social media pages; I might be annoyed when I see this, but it’s their space so if I disagree I can just take my attention elsewhere.

A lot of violence supporters come around to my space on the various social networks, though. The above is from Google+. As time goes on the thought matures within me that our tolerant behavior tends to fuel the poor behavior in others–more so in offline relationships face to face, but that’s another blog post entirely–so it falls to us to not confuse being reasonable with being permissive, and in so doing tacitly condoning things. More to the point: violence advocacy online has real world consequences, and can’t be ignored when it enters your sphere of influence. So, if we are to have these public discussions, why not make them public for real, not just locked away on some secure social network where impact is limited? I view it as my job, so here I am doing my job…

“The strain of anti-intellectualism has been a constant thread winding its way through our political and cultural life, nurtured by the false notion that democracy means that ‘my ignorance is just as good as your knowledge.’”
—Isaac Asimov, Column in Newsweek (21 January 1980)

I have seen the notion floated on the Internet that part of the targeting of French culture is terrorist perception of the society’s “decadence” (derived in part from the attackers’ statement: “The targets included the Bataclan theatre for exhibitions, where hundreds of pagans gathered for a concert of prostitution and vice”), including the immodest dress of the men and women. Let’s look at that. If you are traveling in the Middle East even men are advised to wear loose fitting, longer clothing–pants and a shirt with sleeves. That’s one thing; it’s how their society operates. How about extremists on the fringes of that society? Looking at the religious extremist government of the Taliban—far more representative of the region’s terrorist organizations than Islamic governments—even athletes were arrested and punished for attempting to wear shorts during soccer matches (anybody else remember interviews with relieved Afghan citizens playing soccer in shorts after the USA invaded?).

This is exactly what you are agreeing with when you dismiss violence directed against women as a result of their apparel. Furthermore, the existence of that violence is all too often used to also justify violence against children or other men. You are in agreement with the most repressive of the religious extremists who will harm at random. Contemplate that if you have expressed any concern about the incidents in Paris or elsewhere.

Or you can insist that whatever arbitrary hypothetical you conjure be treated with the gravity of real world violence, reveling in others’ inability to outpace your make-believe with attempts at reason…all with the knowledge that by cultivating conditions for random violence in the world while you yourself exist in the you are supporting random acts of violence against yourself and those in your life. Also known as: the thigh bone really is connected to the hip bone.

You see, I understand it feels comfortable to be in an insular environment where you aren’t confronted by unexpected thoughts or actions. It’s natural to prefer it. I know I do! Yet, I’m convinced it’s our business as adults to challenge ourselves, because the insular environment is to the mind what outer space is to bodies: spend enough time there and you grow weak from loss of muscle mass, frail from loss of bone density, squirrelly from lack of broad human contact.

Don’t worry; I challenge myself more harshly than I do others. In addition, I’m cognizant of the fact I’m almost 7 feet tall and almost 300 lbs. The “it’s nature/might makes right/size hierarchy” approach means you condone megafauna like me either torturing, killing, or robbing you with impunity (because I can’t stop myself when I see you, so stop making me see you unless you want these things to happen). Devote some time to meditating on that one. Unless, of course, you are larger than me.

As for the classist–and potentially bigoted–nature of the comment left on my post pictured above, well, coming from an impoverished urban area (“ghetto”) I can assure anyone who holds those perceptions:

For my part, I long ago adopted a do-not-engage policy for those who jump into discussions with knee-jerk reactions/declarations that they will reject any viewpoint other than that which already resides in their minds. Instead I write blog posts; it is my hope you have enjoyed this one. If so, please consider showing support by purchasing Cog by K. Ceres Wright or Ana Kai Tangata: Tales of the Outer the Other the Damned and the Doomed by Scott Nicolay. My own books are available free to Amazon Prime members or through the Kindle Lending Library.

To aid your digestion of this article please listen to “Solvent” by Skinny Puppy.

This site uses Akismet to reduce spam. Learn how your comment data is processed.